The Buzz About Pollinator Week

The event commenced with remarks and a presentation by ACORE’s President and CEO, Greg Wetstone, on the state of play of the renewable energy sector along with the results of ACORE’s newly published report, Expectations for Renewable Energy Finance in 2022-2025.

Keynote from Doreen M. Harris, President and CEO of NYSERDA

Opening Keynote speaker Doreen M. Harris, President and CEO of NYSERDA, set the tone for the conference by discussing the key findings from the New York Climate Action Council’s Scoping Plan, stating that the cost of inaction exceeds the cost of climate mitigation by $90 billion for the state of New York alone. She then moved to discuss New York’s burgeoning offshore wind sector as a “game-changer” for clean energy in the state. The auction of six offshore wind areas in the New York Bight and continued efforts to build the state into an offshore wind hub puts New York on excellent pace toward its goal for 9 gigawatts (GW) of offshore wind by 2035. The state is acting as a key contributor to achieve the Biden administration’s offshore wind goal of 30 GW by 2030. Harris also emphasized the importance of linking investments into renewable energy and transmission, citing grid congestion as “the biggest challenge in New York state and beyond, full-stop.” The ACORE Finance Forum convened one day after the Biden administration announced actions to mitigate the U.S. Department of Commerce inquiry into imported solar panels, which has severely undermined the stability of the industry. President Biden announced a two-year delay on imposition of new solar tariffs, as well as invoking the Defense Production Act (DPA) to increase domestic solar panel manufacturing capability. Policy experts at the Finance Forum agreed that the White House announcement provided much needed near-term relief for the industry.

Speakers provided their perspectives on transmission planning and the importance of the swift passage of the pending Budget Reconciliation legislation in Congress, which could include historic clean energy tax provisions for the industry that would expand qualifying technologies and provide more certainty to the market that could address the shortage in the tax equity market. Panelists agreed that the effect of these policy provisions cannot be fully utilized until substantial investments in high-voltage transmission are made.

The state of renewable energy deployment Finance Forum attendees heard from renewable developer CEOs and executives on a range of challenges they are currently facing, including policy uncertainty, supply chain concerns, and inflation. The panel agreed that while the past year has been a volatile one, in general, the industry is healthy and there still exists a strong appetite for renewable energy development. Throughout the session, developers engaged in a dynamic conversation on the role of regulation, the future timeline for clean energy tax credits, and how best to increase domestic manufacturing capacity for solar panels. In a fireside chat, energy market experts discussed the short and long-term implications of the war in Ukraine. For many, these developments have re-emphasized the outsized role of natural gas in international energy markets, and increased investment in LNG in the U.S. has the potential to significantly lengthen decarbonization timelines. One panelist observed that to increase American energy independence and protect against the volatility of fossil fuels, the U.S. should follow Europe’s example of doubling down on renewable energy investment. Rapidly deploying renewables and focusing on storage capacity can ensure renewables are viewed as the more attractive and reliable option in the future. Investors at the Finance Forum also expressed relief at the Biden administration’s decision to delay the imposition of solar tariffs. However, they noted that a perfect storm of ongoing supply chain-related delays, inflation and interconnection issues – all of which preceded the Commerce inquiry – will delay many projects and tax equity commitments to 2023-2024. Lenders report having completed fewer deals this year than last year due to delays. Both solar and wind projects are affected by these bottlenecks. Investors emphasized the importance of supportive policy to advance the development of renewables going forward, such as safe harbor extensions and a transmission investment tax credit. Uncertainty due to volatile market conditions is also impacting developers and corporate buyers when signing PPA contracts. PPAs are now being signed closer to the closing date of projects to capture more certainty in prices. Buyers are expecting developers to account for potential equipment cost increases in PPA contracts to hedge against future increases in project costs. Developers are requesting more risk-sharing between the buyers and project developers as part of contract terms. However, despite these challenges, developers report a “bullish” outlook for renewables and grid-enabling technologies such as storage and transmission.

Raising capital for sustainability and diversity, equity and inclusion This panel focused on improving equity in the renewable energy sector by increasing the flow of capital to small-to-medium-sized businesses and Environmental, Social, and Governance (ESG) investments.

Entrepreneurs in the sector state that increasing the representation of smaller enterprises requires dismantling systemic barriers, advancing paths to forming long-lasting business relationships and public policy incentives for renewable development in low-to-moderate income (LMI) communities. In particular, credit policies should be revised to no longer exclude demographics historically impacted by systemic racism, resulting in limitations to capital access and net worth, and there needs to be diversity among key decision-makers. Panelists cited programs like ACORE’s Accelerate Membership Program as notable opportunities for networking among renewable energy entrepreneurs. In a similar vein, the panel on ESG investment featured a robust discussion on how to align investment in renewables with corporate sustainability objectives and the “social” category of ESG investment. In addition to ensuring that renewable energy investment and procurement results in avoided emissions, panelists emphasized that ESG metrics should reflect consumer benefits such as savings in electricity costs, percentage of low-income subscribers, and diversity in company recruitment. Panelists also welcomed the SEC’s proposed rules to regulate climate and ESG disclosures, insisting that company missions are taken into consideration when naming ESG funds. 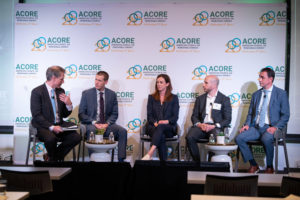 Panelists offered a broad range of perspectives on the state of the nascent U.S. offshore wind sector, including on its unique financing complexities and the Bureau of Ocean Energy Management’s upcoming lease auction schedule. Panelists felt confident about the progress the industry has made toward President Biden’s 30 GW of offshore wind by 2030 goal. Importantly, panelists noted that the lack of capacity in the tax equity market for offshore wind development underscores the need for a direct pay option. The panelists also agreed that the enormous amount of upfront capital required to purchase a lease, even before development begins, reduces the number of potential buyers to the detriment of the industry. ACORE Finance Forum panelists covered improvements to the transmission planning process coming from the Department of Energy’s Build a Better Grid Initiative (BBGI), and how it synergizes with FERC’s Notice of Proposed Rulemaking (NOPR) on transmission to help break the current interconnection logjam that is preventing over 1,300 GW of renewable energy from coming online. Panelists also made it clear that the BBGI and the NOPR are necessary first steps to build out transmission. Continued efforts on a federal and state level are required to foster cooperation and investment that will forge a nationwide Macro Grid that delivers power from areas with concentrated renewable energy generation to areas of high demand. Emerging interest in upgrading infrastructure to support hydrogen development to help decarbonize the grid was also explored. While countries in Europe, like Portugal, have established robust investments into hydrogen infrastructure, there is still uncertainty in the U.S. that has kept many investors on the sidelines as they wait to see how initial projects perform. However, panelists argued that the path to upgrading hydrogen infrastructure is clear, citing the decreasing costs of electrolysis and expanding access to affordable renewable energy that will allow hydrogen to be cost-competitive.

On behalf of the ACORE team, thank you to all who were able to attend the ACORE Finance Forum, especially to our sponsors for making the week’s events possible. Additional images from the conference can be viewed here.

This website uses cookies to improve your experience while you navigate through the website. Out of these, the cookies that are categorized as necessary are stored on your browser as they are essential for the working of basic functionalities of the website. We also use third-party cookies that help us analyze and understand how you use this website. These cookies will be stored in your browser only with your consent. You also have the option to opt-out of these cookies. But opting out of some of these cookies may affect your browsing experience.
Necessary Always Enabled
Necessary cookies are absolutely essential for the website to function properly. These cookies ensure basic functionalities and security features of the website, anonymously.
Functional
Functional cookies help to perform certain functionalities like sharing the content of the website on social media platforms, collect feedbacks, and other third-party features.
Performance
Performance cookies are used to understand and analyze the key performance indexes of the website which helps in delivering a better user experience for the visitors.
Analytics
Analytical cookies are used to understand how visitors interact with the website. These cookies help provide information on metrics the number of visitors, bounce rate, traffic source, etc.
Advertisement
Advertisement cookies are used to provide visitors with relevant ads and marketing campaigns. These cookies track visitors across websites and collect information to provide customized ads.
Others
Other uncategorized cookies are those that are being analyzed and have not been classified into a category as yet.
SAVE & ACCEPT